It is easy to get lost in the lists you find in Ezra 1 & 2. When you get to a list in the Bible it is easy to skim over it and try to find out what is next rather than stopping and asking yourself what the list itself communicates. The first list in these chapters is found in Ezra 1:9-11 and was an inventory of all of the temple items that had been taken by the Babylonians when they destroyed Jerusalem and were carried off to Babylon. These items were now possessed by the Persians who had defeated the Babylonians and just so happen to have been stored for safe keeping by the providence of God because God had a purpose for them. These items were not to be kept in Babylon or Persia for ever. They were to return back to Jerusalem and used in worship of the Lord once more when the people returned. I love the humor of John Golingay on this list,

“Unintentionally, however, by putting these objects into his god’s temple Nebuchadnezzar had made sure they would be kept safe and would not end up on the Babylonian antiquities market and eventually in the British Museum.” (Ezra, Nehemiah & Esther, 13).

These verses are there for religious and covenantal reasons showing the faithfulness of God to restore his people back into their land, their homes and God’s temple. In Thorntveit’s Interpretation Commentary he believes that precise counting of the temple articles,

“out lies in its testimony to the completeness of the restoration as restoration and not merely innovation, as the numbering of each utensil proclaims the cultic assurance of God’s covenantal continuance with the people.” (Thorntveit, 18).

This is far more than a list. It is a reminder of God’s covenant faithfulness. The things that were taken have now been restored down to the very last one.

The second list we encounter in these chapters takes up the majority of Ezra 2. Much like the list of temple items this list of people represents those who came out of exile and were returning. Obviously, not all who left Judea made it back but what this list accomplishes is to make two vital connections for those who are going to return. Like the vessels returned by the Persians in chapter 1, this list also has God’s covenant faithfulness written all over it. Here are the two vital connections you find running throughout the list. The list ties people to the section of the land they lived in and the family they descended from. This goes back to God’s covenant with Abraham where he promised him both land and descendants. A third element rounds out the list and this connection seems to me to be more connected with the Mosaic law/Sinai covenant in helping to re-establish priestly/Levitical lineages and roles from their ancestors (2:36-58). 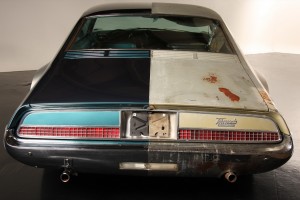 These two lists come together to remind us of God’s covenant faithfulness. Every vessel is accounted for and every person is accounted for as well as their precise connection to the land and to the priestly/Levitical roles. As Goldingay said above, this is about restoration…not just partial restoration but full restoration. Nobodies wants a classic car that is only restored from the front bumper to the middle of the car. We want full restoration. We want it done right. So does God. God is interested in full restoration because He loves his people and He is also deeply concerned about his full covenant faithfulness being made known through his sovereign and grace filled actions in the world.

Let me end with some application and do that by bringing in another text that is very meaningful to me. The text is Joel 2 and I will at some point do a full post just on that chapter but I want to mention it here because the story told in that text is a three part story that Ezra and Nehemiah tell the unfolding of the third part. Joel 2 is the story of an invasion of locusts who will rip the land to pieces. The results will be devastating (Joel 2:1-11). God will relent but first he waits on his people to repent (Joel 2:12-17). When God sees their turn in heart he will restore everything back to them again (Joel 2:18-32). The last section is the one quoted in Acts 2 about the work of God’s Spirit in restoring things. Let’s wrap up with one of my favorite verses in all of the Bible that brings me so much hope. This verse tells me that though things can get rough and much can be taken from us in this life, God has the final say and his say is restorative,

“25 The Lord says, “I will give you back what you lost
to the swarming locusts, the hopping locusts,
the stripping locusts, and the cutting locusts.[d]
It was I who sent this great destroying army against you.
26 Once again you will have all the food you want,
and you will praise the Lord your God,
who does these miracles for you.
Never again will my people be disgraced.
27 Then you will know that I am among my people Israel,
that I am the Lord your God, and there is no other.
Never again will my people be disgraced.”