God is at work…

Last week was an incredible week with the church we support in Costa Rica. We handed out fliers in the community advertising the classes that were being taught at the church on evidences for the Christian faith and while the response rate was pretty slim that was one young man who came because someone we handed a flier to later that day handed it to him. His name is Pablo and Pablo was seeking. Hard. He wanted very much to know more about God and to know how to read the Bible. He downloaded a Bible app on his phone and came to every single meeting/class we had. He was greatly encouraged by his time with the church and we were greatly encouraged by him. We found out yesterday morning that he responded to the invitation in Costa Rica and was baptized into Christ!

Upon our return to the states we learned that a couple that had recently just walked by the church and came in for some spiritual help also wanted to be baptized! Praise God!

I know we aren’t talking thousands of baptisms here but each and every time a person commits themselves to the Lord, in spite of the difficulties and things that tell them not to (which exist in both of these instances) that something amazing happens. We witness resurrection. We see people go from death to life. We watch a new birth through the washing of water and through the Word. People are hungry. People are seeking. People are also under the attack of the Evil One and the world desperately needs the church to stand up and fill the gap.

God is at work…and I love having a front road seat to see what He is doing and what He is going to do next! 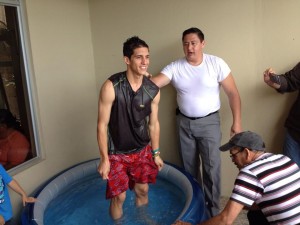 One Response to God is at work…