Bible translation in the Bible itself:
Bible translation has been with us for quite some time. I believe the first instance of translation that we have evidence of is in scripture itself when the exiles returned to Jerusalem. When Ezra reestablished the altar, the temple and the Torah with the returned exiles we get this fascinating verse in Nehemiah 8:8,

“They read from the Book of the Law of God, making it clear and giving the meaning so that the people understood what was being read.” – NIV

“So they read from the book, from the law of God with interpretation. They gave the sense, so that the people understood the reading.” – NRSV

The root of the word used here means “to break up” used in this sense it is about translating or interpreting/explaining. It is entirely possible that this generation that didn’t grow up in Israel spoke Aramaic and would have a harder time understanding the Torah in Hebrew. So either Ezra translated it as he went into Aramaic so they could understand its meaning or else he read it in Hebrew but gave explanation for what it meant.

In the New Testament we see use of Bible translation as the apostle Paul often quotes from the Greek translation of the Old Testament (Septuagint). The Gospel writers do at times as well.

There has always been a desire to translate the sacred texts of scripture from the original languages into the languages of the day so that people could understand what God said in the Bible. We see that above from Hebrew to Aramaic and then from Hebrew to Greek.

Eventually the need for Aramaic translation increased as Hebrew became less and less used and understood by the people. The synagogues began trying to meet this need by first reading in Hebrew and then giving a paraphrase in Aramaic. Over time these paraphrases and interpretations into Aramaic were written down into the Jewish Targums.

Bible translation from Hebrew and Greek to other languages:
As the Romans took control of things the common language began to shift from Greek to Latin. Pope Damascus I asked Jerome to come up with a better Latin translation of the Bible. Jerome took several already existing translations and added much of his own work to create the Vulgate in the 4th century. As was just mentioned, Latin translations of the scriptures existed before Jerome produced the Vulgate and we see evidence of that in quotations by the church fathers (Tertullian and Cyprian in the 2nd and 3rd centuries). On a side note, the Gutenberg Bible of the 1450s was a copy of the Vulgate. Sorry if you have $20 million you were planning on dropping for your every day knock around Bible but don’t read Latin! The Vulgate eventually went on to become the official Bible of the Catholic church. It didn’t stop at Latin…the Bible was also translated into Syriac (2nd or 3rd century), Coptic (5th century) and other languages over time. Of these, the Syrian translations are of the most interest as the Gospel spread from Antioch in Syria outward. Syriac is very similar to Aramaic and Hebrew. The Syrian translation of the Bible is called the Peshitta.

The word of God was inspired in its original languages and has undergone over the years the work of translation into the languages people can understand. It is a difficult process. It is an imperfect process. The work of translation has always had issues. It had issues from Hebrew to Greek, Greek to Latin and still has issues from Greek to English. Should that shake our faith in the English Bibles we have today? The answer is no. I love the point made by Daniel Wallace…that while we don’t have the original documents that form the New Testament (handwritten by the apostles themselves) we do have enough manuscript evidence at hand to ensure that we have all of the original readings in the evidence that we have. If you take the 5358 handwritten (pre-printing press) Greek manuscripts that we have, plus the quotations from the church fathers, we have in one place or another all of the original readings. What scholars have to do is take all of that manuscript evidence and compile the most accurate and reliable Greek manuscript they can. If you look at a Greek New Testament (typically UBS5 or NA27) what you see is the text they have concluded is the most accurate above and potential textual variants below each with a grade of certainty. In any given verse among the variants we have at our disposal is the proper reading. 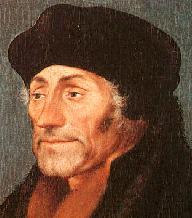 In the early 1500s Erasmus decided to put together the most accurate Greek New Testament he could based on various manuscripts that he had at his disposal and also based upon the Latin Vulgate. He didn’t have the textual evidence mentioned above that we have discovered since the 1500s at his disposal. He used seven different Greek manuscripts all dating from the 12th & 15th century. You can see the list here. Where Erasmus didn’t have a Greek text on a particular verse he relied on the Vulgate and backwards translated from Latin to Greek to complete his Greek New Testament. You see this reflected in a number of places including:

Acts 9:6 “and he trembling and astonished said, Lord, what wilt thou have me to do? And the Lord said unto him…”

and most notably where he was missing the last page of Revelation (missing the last 6 verses) which the Vulgate mistakenly had “book of life” instead of “tree of life” (Rev 22:19) compare KJV & NIV) that Erasmus back translated from Latin to Greek to create his own version to fill the void. Since the 1611 KJV translators used Erasmus’ work, they translated it back into English and the error continues on in the KJV even to this day.

Erasmus’ Greek New Testament (TR) underwent multiple revisions that eventually became the Greek text used along with the Bishop’s Bible that were the basis for the KJV. It was the third edition of 1522 that was used by William Tyndale in his 1526 English Translation of the New Testament. The third edition was also the one used by the KJV translators. More on Early English translations later.