Everything You Wanted to Know About the King James Bible 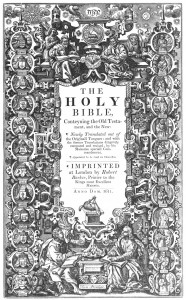 The NIV has been under attack lately because people say it “deleted verses” from the Bible. The first thing that comes to mind when I hear that accusation is the question, “What exactly did they delete? Why?” Turns out that the early English translations were based on a few dozen Greek manuscripts and only a couple of Hebrew manuscripts that had some issues. It wasn’t anything major but it was enough of an issue that archaeologists and Bible scholars had made some discoveries between 1611 and 2015 that have greatly enhanced our knowledge of the Greek and Hebrew texts of the Bible. In some instances we have found that an extra word or phrase or verse got inserted hundreds or even a thousand plus years after the 1st century. The attempt is to remove what wasn’t there. In other instances have found that some words got taken out over time and the attempt is to put them back. This is not about adding or deleting words but restoring the original text as best we can.

Bottom line, the English translations be they KJV, NIV, etc the translators did the best they could with what they had. In the process, the Bible has become more accurate not less. There is no grand conspiracy here.

What is fascinating is that if you look at the KJV itself, those translators had to make similar decisions in their work and in the process made some mistakes of their own. If you take the accusations and claims used against other translations to discredit them the same standard would discredit the KJV as well. Point being…none of these translations need to be discredited at all. All this proves is that humans translated the Bible. That’s it. This is not about conspiracies or any of that. Here are some examples of problems in the 1611 KJV that you might not be aware of. I am going to try to keep this brief and use a minimum number of examples to make the point.

I am also leaning heavily here into the work of Bruce Metzger, Daniel Wallace, D.A. Carson, F.F. Bruce and Jack Lewis. I wish I could take credit for all that is to follow but credit must be given to those who have done the heavy lifting who I am indebted to.

The text:
First, the 1611 KJV was not an original translation. It was base off the Bishop’s bible and the first rule to the translators was that they were to follow the Bishop’s Bible as closely as possible. Bruce Metzger points out that the translators used a few other early English translations as well, at least a half dozen in developing the KJV (The NT: Its background, growth and content, 335). In Metzger’s book “The Bible In Translation” he brings up the fact that because of this the KJV is not a new translation and that even the “translators” who he called the “revisers,” said as much in the preface, “It was not to make ‘a new translation, nor yet to make of a bad one a good one…but to make a good one better, or out of many good ones one principal good one.'” (p.76). He goes on to say, “Although usually called a translation, it is in fact merely a revision of the Bishop’s Bible, as this itself was a revision of the Great Bible, and the Great Bible a revision of Coverdale and Tyndale.”

The 1611 also included the Apocrypha until 1629. Metzger mentions on that same page that in 1615 Archbishop Abbot of Canterbury “forbade anyone to issue the King James Bible without the Apocrypha on pain of a fine and one year’s imprisonment.” Starting in 1701 Ussher’s timeline of Bible history was included that is now known to be incorrect in many instances.

As far as the Greek text used in translating the KJV, they leaned heavily on the work of Erasmus who based his Greek New Testament on a handful of manuscripts that dated within a few hundred years of 1611. They only had a couple of copies of the Hebrew Old Testament to work from and only a single copy of the Septuagint. They did the best they could with what they had and all things considered, did an outstanding job considering all of this. To give a point of comparison, today we have over 5000 handwritten manuscripts, some dating back to within 100-200 years of the originals compared to the KJV manuscripts that were no more than a few hundred years old (that is excluding Bezae from the 5th century, which Lewis doesn’t believe they even referenced).

Revisions:
Early on (1600s) it was noted that many of the marginal readings/translations were actually superior to that which was included in the translation. There were six major editions of the KJV the first was in 1611. As errors were discovered (typically typographical but some more significant) in both the text and the marginal notes corrections began being made within a year (tens of thousands of corrections). Corrections were made in 1612 and 1613 totally under 500 errors that were addressed. As more editions were printed other random errors crept into the text that made for some interesting editions of the KJV that come with their own nicknames:

Numerous revisions were made to the 1611 KJV early on. Kilburne noted 20,000 errors and the American Bible Society found 24,000 variants between the six editions of the KJV. The 1611 KJV is not perfect.

Omissions:
Omissions are words and phrases that we now know should have been in the text but either got dropped by the KJV or they just didn’t have it in their texts.

The NIV has been accused of deleting verses from the Bible. Again, these are verses that were never there to begin with…making this a correction back closer to the original. Turns out the KJV was missing some words, phrases, etc.

Translation errors:
I don’t want to spend much time here. This gets into interpretation and often our doctrine can get in the way to muddy things up here. I will just mention a few things were the translation was obviously influenced by things other than the text:

“God save the king” in 1 Sam 10:24, 2 Sam 16:16, 1 Kings 1:25, 2 Kings 11:12 literally says, “Let the king live” Notice “God” is not even in the verse neither is the idea of saving or salvation. Those are added into the text by people who were under the rule of King James. It is completely inaccurate presumably due to influence of England and loyalty to the throne. In fact, if you read the original “Translators to the Reader” that was in the intro to the 1611 KJV they give praises to King James. They also address the critics they know will come after them for changing earlier English versions!

Words that we now know the meaning of:
In addition to covering many other things the translators (in the Translators to the Reader) admitted their own weakness in understanding words that only appear in the Bible that they have difficulty translating,

“There be many words in the Scriptures, which be never found there but once (having neither brother nor neighbour, as the Hebrews speak), so that we cannot be holpen by conference of places. Again, there be many rare names of certain birds, beasts, and precious stones, etc concerning which the Hebrews themselves are so divided among themselves for judgment, that they may seem to have defined this or that, rather because they would say something, than because they were sure of that which they said.”

In short – they don’t have enough of a grasp of the rarer words in Hebrew to fully or precisely articulate and translate it into English. Here is the good news. 400 years of archaeological discovery has narrowed that gap. As archaeologists discover more and more things our understanding of ancient language and culture improves. There are things we know now they didn’t understand back in 1611, particularly how to translate various words that they just didn’t have the information (extra-biblical information) to shine a light on these words and translate them accurately. Here are a few examples:

Why the difference in translation? The Hebrew word “pim” wasn’t understood until l Robert Alexander Stewart Macalister’s excavations at Gezer in the early 1900s. Again, there were 767 words that we didn’t have any example of from outside the NT as of the late 1800s. Today, according to DA Carson (KJV Debate, 95) there are less than 50.

Another quick example noted by Jack Lewis in the aforementioned book: Que (1 Kings 10:28) is a city, not “linen yarn”

With the New Testament, translators didn’t understand the difference between Koine (common Greek) used in the NT and classical Greek until the late 1800s. This understanding came along with Adolf Deismann and his papyrus discoveries that were written in Koine Greek. That put the KJV translators at a disadvantage that has been removed today. I could quote to you verses in the KJV about unicorns and satyrs but we don’t need to go there…the point has been made. We now have a better understanding of both Greek and Hebrew than they did and that is a good thing!

There is this idea out there that translation has gotten worse, not better because it doesn’t comply with the KJV. That just isn’t accurate and it fails to grasp the KJV for what it is…the best translation they could produce at the time but that didn’t benefit from what we know today.

Doctrinal concerns:
I am going to provide part of a chart from Carson’s book “The KJV Debate” that gives us a bird’s eye view of one of the most hotly contested doctrinal issues in translation and that is the divinity of Jesus Christ. Critics of the NIV have gone out of their way to prove that the NIV is out to strip Jesus of his divinity. So Carson works off of a chart made by Victor Perry of verses that some might interpret either way as to Jesus’ divinity to see how the major translations translated these verses. In other words, these are verses that an interpreter could potentially take either way and they have to make a decision toward the particular verse being about Jesus’ divinity or about something else. X = endorses the divinity of Jesus & O = does not.

This chart shows the claims the NIV is anti-Jesus as the divine Son of God have no basis.

Last, this doesn’t mean that I think the NIV or NASB or NRSV are pie in the sky perfect translations. They have their issues and I am open about saying that and even pointing them out. No problem. Again, humans translated these…they are going to have issues. We need to extend grace to those who translate the scriptures into language people can read whether they were alive 400 years ago or are our contemporaries today. That doesn’t mean we accept errors in translation. It does mean that we are careful in assigning motives to people about the work they have done and develop vast conspiracy theories and scare tactics to discredit the work of godly people who have devoted themselves to a difficult endeavor.

For more on this see this article I wrote in 2007 that supplies even more information – Paradigm Issues Facing the Church: Translations

Like Loading...
Filed Under: Bible, Bible Translations, New Testament, Old Testament
← The Three Places Paul Reaches Out to in Athens and What We Can Learn From It
The Bible in Translation: 450 BC to 1500 AD →