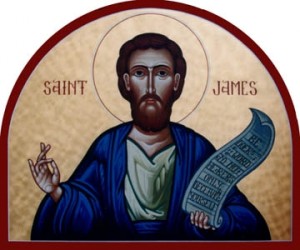 In studying for a class on the book of James I ran down some information on the author, James the half-brother of Jesus that I found extremely helpful in understanding the letter itself.

James is the Greek version of the Hebrew name Jacob. His mother was Mary (Mark 6:3), his half brother was Jesus (Gal 1:19) and his full brothers were Joses, Judas (Jude) and Simon (Mark 6:3). James didn’t believe that Jesus was the Messiah during Jesus’ lifetime (John 7:5).

James’ story doesn’t end with him as an unbeliever. The resurrected Jesus made a special appearance to James in the days between his resurrection and ascension (1 Cor 15:7). After that we find James, Mary and others waiting with the Apostles for the Holy Spirit in Jerusalem (Acts 1:14). As the church began to be persecuted following the martyrdom of Stephen in Acts 7 it also began to disperse out from Jerusalem (Acts 8 & 12). It was at that time, 44 AD, that James the Apostle was beheaded by Herod (Acts 12:1-2) and Peter was arrested but was miraculously released by an angel during the night (Acts 12:3-7). Peter ran to the house of Mary, the mother of John Mark (who wrote the Gospel of Mark) and there told of his escape, telling the disciples to make sure they told James (Jesus’ half-brother) all that had happened (Acts 12:17).

It was around that time that James began to have prominence in the church in Jerusalem. Paul even called James one of the three pillars of the church in Jerusalem along with Peter and John (Gal 2:9). James helped spearhead the Jerusalem Council we find in Acts 15 where the early Jewish Christians were trying to figure out how to incorporate converted Gentiles into the Christian community. Paul recounts those events in Galatians 2:1-10. Paul had a follow up meeting with James in Jerusalem that is in Acts 21:17-26 where he reported all God had been doing in their work among the Gentiles, reiterating the decision reached in Acts 15.

Eusebius tells us in his book “Church History” that in the year 62 James was martyred by the scribes and Pharisees who threw him down from the temple and then stoned and beat him with a club.

When you consider all James went through, starting with seeing his own brother die on the cross and all of the persecution of the church in and around Jerusalem James 1:1-18 just doesn’t read the same anymore. I used to read it as if it was about my daily troubles, and in a sense it certainly covers that…but when you consider all they went through those verses just don’t read the same anymore. They put things in perspective, that those who have gone on before us knew the true meaning of suffering and that persecution for them was not an online disagreement…it was life and death. Here are those words from our brother James…

James, a servant of God and of the Lord Jesus Christ,

To the twelve tribes scattered among the nations:

Consider it pure joy, my brothers and sisters, whenever you face trials of many kinds,  because you know that the testing of your faith produces perseverance. Let perseverance finish its work so that you may be mature and complete, not lacking anything. If any of you lacks wisdom, you should ask God, who gives generously to all without finding fault, and it will be given to you. But when you ask, you must believe and not doubt, because the one who doubts is like a wave of the sea, blown and tossed by the wind. That person should not expect to receive anything from the Lord. Such a person is double-minded and unstable in all they do.

Believers in humble circumstances ought to take pride in their high position. But the rich should take pride in their humiliation—since they will pass away like a wild flower. For the sun rises with scorching heat and withers the plant; its blossom falls and its beauty is destroyed. In the same way, the rich will fade away even while they go about their business.

Blessed is the one who perseveres under trial because, having stood the test, that person will receive the crown of life that the Lord has promised to those who love him.

When tempted, no one should say, “God is tempting me.” For God cannot be tempted by evil, nor does he tempt anyone; but each person is tempted when they are dragged away by their own evil desire and enticed. Then, after desire has conceived, it gives birth to sin; and sin, when it is full-grown, gives birth to death.

Don’t be deceived, my dear brothers and sisters. Every good and perfect gift is from above, coming down from the Father of the heavenly lights, who does not change like shifting shadows. He chose to give us birth through the word of truth, that we might be a kind of firstfruits of all he created.

PrevPreviousLiving Between the Cups…which Passover Cup Jesus used at the Last Supper and What that Means for Us
NextResurrecting Evangelism…Here is One Missing Piece to Viable, Intentional Outreach in Our ChurchesNext