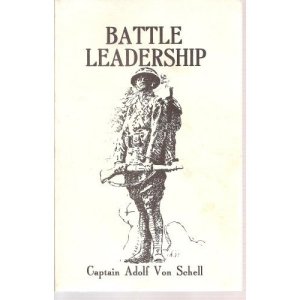 People want to follow a leader who has made a name for himself. Captain Von Schell talks about how much of a moral booster it was to his troops when they knew they were following the orders of a famous leader.

“[The experienced soldiers] said, ‘We are fighting now under Hindenburg who has already beaten the Russians so many times. If Hindenburg is commanding us we are sure to win. Just you wait and see…’ This confidence in their commander was shared by the officers also. Everyone was inspired by the fact that they were fighting under Hindenburg. His fame at this time was already secure. He had won the battle of Tannenberg, the modern Cannae, had defeated the Russians at the Mazurian Lakes, and had conducted those two splendid campaigns in southern Poland and at Lodz. The officers looked into the future with the utmost assurance.”

People get great assurance from following great leaders. How does this apply in the context of Christian ministry? In 1 Cor 11:1 Paul wrote, “Follow my example, as I follow the example of Christ.” Christian leaders lead best when they point people to Christ. Our reputation as Christian leaders can only be so great as the degree to which we point people to Jesus. Jesus is the author and perfecter of our faith…not the pastor, elder, minister, deacon, etc. Just as those who were under the orders of Hindenburg felt assurance due to his reputation, ability and excellent leadership…we get our assurance from following Christ and being under his orders. He calls the shots and we follow because his reputation precedes him.