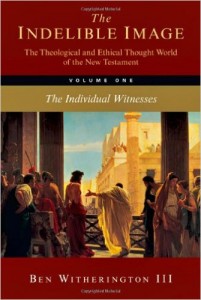 When scholars write systematic theologies they often go about it in one of several ways: chronologically, thematically, topically and a few other ways. The approach Witherington has chosen to couch his New Testament theology in is the topic of ethics as it runs through the New Testament texts within each text and across texts as well. I am not sure anyone else has really attempted to write an ethics of New Testament like this and certainly not with this much detail.

First, this book is thorough. Did I mention both volumes cover 1700 pages? It is 1700 pages long because there is no interest in just giving you a list of summary points or ethical highlights.

Volume 1: The Individual Witnesses
The first volume combs through the details, culture and religious influences of Judaism, structure, author, over all message, rhetoric and argumentation of each epistle, etc to give you a thorough scope of the ethics of the New Testament nearly book by book and writer by writer. Witherington isn’t just going to give you a list of “I am” statement in John and explain what that means for us today. He gives you each statement, in context and in each particular situation and how they fit together as a whole and with the immediate narrative in all 7 instances in order for you to more fully grasp what John is doing and teaching and accomplishing in using them in his Gospel. This book isn’t just going to give you a list of the 7 signs in John. Instead, you get them in context and how John uses them in lieu of miracles to teach us things about Jesus and ourselves as the narrative unfolds and John works his discourses around these statements. It is truly masterful. He works through the whole Gospel that way…and all the rest of the Gospels…and all of Paul’s letters…and all of the general letters…and Revelation! At the end of each section he gives short bibliographies for further study of each book of the New Testament. Did I mention it is 1700 pages long?

Just to give you an idea on how thorough this book is, the section on 1 Peter is 60 pages long and nearly goes verse by verse or at least pericope by pericope through 1 Peter giving a Christology and ethical guide to the letter. His section on Hebrews is over 70 pages long and runs through the entire book of Hebrews, breaking things down into coherent parts that are then examined and the ethical components extracted and analyzed. Oddly enough, Revelation gets one of the the shortest treatments in the book.

Other books and authors get equally long treatments and attention. All of this fits under the main subject of the ethics of the New Testament writers because these things are necessary to a general understanding of their overall message. So that is why this is like a commentary, a New Testament theology and an introduction to New Testament ethics all rolled into one. You are going to walk away from the New Testament with a general knowledge of the overall messages of each book and how that impacts the way we live and how we treat others and why that is important from a theological perspective.

Volume 2: The Collective Witnesses
The second volume focuses on the “shared symbolic universe and narrative thought world of these New Testament writers.” (p.28). In other words, these writers were primarily Jewish who were already well in tune with the Old Testament and with their Jewish heritage and culture who experienced the coming of the Messiah that fulfilled the expectations of them as individuals, as a community and the expectations of the Messianic prophesies in their scriptures. This means they had to do the hard work of creating or seeing a meaningful whole out of what they had previously in their scriptures and what all of that meant in light of the actual arrival of the Messiah along with his teaching, actions, and resurrection. So, he says, this is not intended to be a systematic theology where the particulars of each author is read through the lens of their other teachings or the teaching of the whole NT or the OT but that each author is allowed to speak for themselves,

“I am not trying, for instance, to create an artificial synthesis on the basis of later systematic or canonical categories. Were I to do the latter, I would be creating a New Testament theology or ethic. It would be my synthesis, not that of the writers of the New Testament themselves. Rather, what I am trying to do is let the New Testament writers themselves give us evidence, instances, examples, hints about how they would write such a synthetic work.” – Witherington, B., III. (2010). The Indelible Image: The Theological and Ethical Thought World of the New Testament: The Collective Witness (Vol. 2, p. 29). Downers Grove, IL: InterVarsity Press.

The most important part of the thought and theological world of the NT writers was the theology of the Old Testament, particular the covenant with Abraham. If you read Wright’s newish tome on Paul you will get this idea put to you enough times that one finally starts to pay attention. It is very, very difficult…impossible actually…to get the full implications of the NT story, the Gospel story, without understanding the “thought world” of these early Christians the NT writers, primarily the scriptures they were drawing from which was our Old Testament. The prime example of this given by Witherington in this book is the typology used in 1 Corinthians 10 where Paul looks back to the OT and makes the OT look forward to the NT,

“Paul’s way of handling this text works two ways. He will interpret the Old Testament events in a Christian and christological manner, and he will interpret contemporary events in light of the Old Testament stories. In other words, he will move in both directions at once: from experience to text and from text to contemporary experience. When Paul says that “the rock was Christ” (1 Cor 10:4), note that he does not say either that “the rock is Christ” or that “the rock signifies Christ.” In Paul’s view, it is appropriate to read the Old Testament in the light of his knowledge of how these texts were interpreted in Jewish sapiential literature, where it was argued that Wisdom was the rock that provided water for thirsty Israel in the desert (Wis 11). Paul believes that Christ, who is the Wisdom of God, was in fact spiritually present, as the preexistent one, with Israel and providing them with benefits. This is not an interpretive or a hermeneutical move so much as a theological reflection on what was believed to be actually the case during the Old Testament times.” – Witherington, B., III. (2010). The Indelible Image: The Theological and Ethical Thought World of the New Testament: The Collective Witness (Vol. 2, p. 154). Downers Grove, IL: InterVarsity Press.

Logos functionality
As always this being a Logos resource comes with the full functionality and benefit of being readable, searchable and usable in Logos Bible Software. This makes it faster to read the scriptures referenced as they appear in roll over popups in the text as do the end notes. This makes storing, reading and using this resource a lot more streamlined than if I had it in a hard copy…although, I still do love holding a book in my hands at times! At least I can digitally dog ear these pages by highlighting and adding notes that I can easily come back to and find at a later date much more easily than I can find notes I write in a hard copy! How many times have you wished you had a search engine for the marginal notes you have written in hard copies? Not so with Logos. That is one more thing I love about reading through their software.

So this is a very worthwhile book that I hope you will consider. Most people will use it as a reference more so than something to be read all the way through.