Layers of the Good Samaritan: More than Meets the Eye 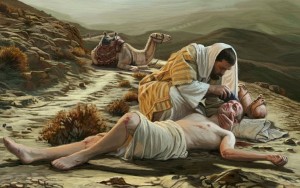 The story of the Good Samaritan in Luke 10 is a complex one. On first glance it is relatively simple…be kind and compassionate even to people who are hard to love. The more you dig into this parable the more you see that there is a richness and depth to this parable that isn’t obvious on a quick reading disconnected from the rest of the Gospel.

First, an understanding of teachers of the Law. They were usually off duty priests. When you read the story with that in mind you find Jesus placing the man who asked the question right into the parable itself. So not only was the man asking the question trying to “justify himself” to not have to love everyone, the priest in the story also justified himself to not have to love (have compassion on) everyone either.

Second is the broader context of the Gospel of Luke. The parable says that the traveler was going down from Jerusalem to Jericho (10:30). At the end of chapter 9 (vs 51-53) we find out that Jesus is on his way to Jerusalem. The rest of the Gospel of Luke happens on the way to Jerusalem where Jesus will be tried, be beaten, stripped of his clothes and die. What is more Jesus passes on this same road that he uses in this parable. Luke 18:35-19:27 recounts Jesus stop in Jericho where he heals a blind man, meets Zacchaeus, and tells the parable of the ten minas. In 19:11 we learn, “While they were listening to this, he went on to tell them a parable, because he was near Jerusalem and the people thought that the kingdom of God was going to appear at once.” Then in in 19:28 we get this, “After Jesus had said this, he went on ahead, going up to Jerusalem [from Jericho].” Jesus is on the same road he uses to answer the question “who is my neighbor” in Luke 10.Why the up and down language? Because Jerusalem was higher in elevation than Jericho by several thousand feet (Jericho is actually below sea level) so you literally go up from Jericho to Jerusalem and down from Jerusalem to Jericho.

What is more, the traveler in Luke 10 is robbed, beaten, stripped of his clothing and left for dead only to be passed by, by a priest and a Levite. Jesus goes to Jerusalem and he is also robbed of his things, beaten, stripped and left for dead…only he dies. Jesus is the ultimate traveler in the parable of the good Samaritan. I believe Jesus is also the ultimate good Samaritan…the one who has compassion on the hurting and is willing to pay whatever it takes to make us whole.

If I am honest with myself I find myself in the story in two ways as well. I would like to be the good Samaritan and in some ways I can fill that role when I act as he acted. But first I am the robbers…the one who has done injustice to my fellow man. The twist is, I need rescued as well…rescued from a way of life that sees others as existing for my own benefit…to be taken from at will and exposed and extorted for my own gain. The robber needs a certain kind of rescue as much as the priests, Levites and the man on the side of the road do.

There is one last layer that needs unearthed and that is the layer of our own self-centeredness. Jesus forces the teacher of the law to answer his own question and the man cannot even say it was the Samaritan. In his words it was the one who had pity on him. This answer shows us the depth of the man’s problems and helps us see that his ability and desire to justify being unloving is still holding onto his heart…maybe just a little less than it was a few verses earlier. The challenge for him and for us is to go and do likewise and to not hang on to stereotypes of who the good guys and who the bad guys are…further justifying our own corrupt desires to draw lines where they are not.

Like Loading...
Filed Under: Bible, Christianity, Gospel of Luke, New Testament, Parables, Religion
← That Little word “Of”
Jeremiah 29:11 is about God, not you…the Effort to Convert a Verse by Baptizing it in Consumerism →