The Kindergarten Parking Lot and Being Theologically Stuck 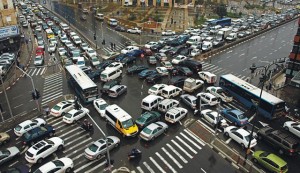 This morning as I was attempting to leave the school parking lot the traffic got into a position where everyone was stuck. I was trying to turn out of the lot but couldn’t because the street I was turning on to was stopped up by a car trying to turn into the lot that I was in but didn’t have room to pull in. So I couldn’t go because he couldn’t go and he couldn’t go because I couldn’t go. In the meantime a few dozen people were stuck sitting there waiting for the only (legal) option to fix it…the guy who was trying to turn needed to take a new direction (give up and go straight) because he was the only one who was in a position to get us out of the locked down system.

There comes a point in time when the way things are going just don’t work. You are stuck and there doesn’t seem to be a viable way out unless someone breaks the cycle. It is going to require that person to see that there is a viable alternative that breaks things out of their stuck position.

There are two different causes for feeling stuck. Sometimes God is the direct cause of this. Like Moses in the wilderness for 40 years, sometimes being “stuck” is the right thing to happen. In those moments we don’t need to fight it…we need to live in it and learn from it. But there is another kind of stuck that comes with more options. It is self-imposed stuckness…the kind of being stuck that we bring upon ourselves unnecessarily. It is like we drew extra lines on the road that the city didn’t paint. They are there but they aren’t the law and crossing those lines will offend some but it won’t offend the “One”.

One of the places that I believe will be challenged in the near future is our definition of “church.” Now, what is interesting here is that we have taught this well but haven’t practiced what we preach. In Churches of Christ we have long said that the church isn’t the building but the people but then in practice act like it is the building. We need to grow into the correct teaching that we have taught for many, many years and recognize that while our Sunday assembly is certainly a very, very special time…it isn’t even close to everything when it comes to what church is about. Church happens when Christians are together and this typically happens more in homes than it does in the large Sunday assembly.

I believe we will soon have a richer experience of “church” as we begin to explore things that are perfectly biblical but don’t perfectly fit our tradition. In doing so, I think there are times of refreshing on the way for the Lord’s people as we embrace our traditions but also don’t feel legalistically bound to them. I believe there is a time coming when scripture and tradition are both appreciated but only the first of which is seen as binding.

At the same time, I think the challenge that will come out of all of this is the place of scripture as an authoritative document for life and practice. That is going to be challenged more and more and I think we need to do a better job of getting to know both the Word itself and the God who inspired the Word.

All that to say, we don’t have to be theologically stuck. There is a way out that is perfectly “legal” and brings a lot of freedom to all of those who need to break out of the gridlock. It just takes one person who can see the alternative way that is still a godly, Christ-like way that just might not follow all of the lines of our tradition.

Let’s just hope we can avoid this…

Like Loading...
Filed Under: Christianity, Church, Church of Christ
← Why Do We Exist?
Running in the Dark and the Light →

One Response to The Kindergarten Parking Lot and Being Theologically Stuck