Progressivism and Conservatism Part 3: Deal With Reality, Not Caricatures 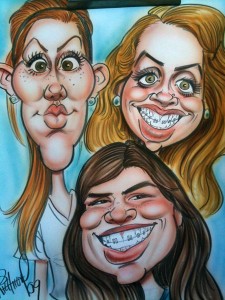 On any given issue the extreme positions get the most attention. That is a problem in and of itself but what is even more problematic is when we transfer the extreme views to everyone who we believe is in a certain camp. If someone is conservative, the thinking goes, we can assume they are a legalist and bash them for it. If someone is progressive then, the thinking goes, we can bash them for hating the Bible and not believing it has any authority…ever. On and on it goes. Few stop to listen to the nuance of the other’s position because we already have them figured out in our heads.

That way of thinking is prideful at best. It is an outgrowth of subtle and insidious thoughts that lie under the surface that we must deal with ourselves or else be consumed by them.

Let me use an illustration, literally, to make the point. These discussions work a lot like those caricature artists that you see in amusement parks. You sit down for a few minutes and the artist starts their work. They exaggerate all of your worst or strongest features, making things way out of proportion to reality. It is all in jest and people have a great time doing it. But no one would send that in as a head shot! No one would use that picture on the wall of family pictures. Those pictures have a function…humor. They are not intended to represent reality. It is not how people really see you so you will never see that picture up in the hallway of pictures at your parent’s house.

Theological conversation often turns into a caricature drawing match…who can characterize the other in the most extreme way…making your ears way too big or your eyes too close together…that mole you didn’t even realize was there is drawn huge with a few hairs sticking out of it. That isn’t the real you but that is how the other person wants to see you because that version of you is much easier to dismantle and defeat.

We must deal with real people in honest ways. That means, again, we must be listeners. We come into conversations as much the student as the teacher. If we find ourselves drawing caricatures, we must stop ourselves and hand the pen back to the other person because only they have the permission to draw the picture of what it is they believe. Watch them draw for a moment before you criticize. It is easier to characterize a tiny profile picture next to the name of a stranger on facebook than it is to do that looking someone in the eye. Looking in the eye has been replaced with looking at the avatar…it just doesn’t work well because it dehumanizes and depersonalizes the conversation. People attack positions that don’t exist and people that don’t exist because in their minds they have drawn the caricature and are convinced somehow that is reality. It is a shortcut. It is easier. It is a mistake.

What caricatures have you been guilty of drawing and how do we get past that…realizing that a real person is at the other end of the conversation…a person Jesus died for, a person whose mother still thinks they are cute…a person who has to go to the DMV just like you do?

I want to thank illustrator Tom Richmond for permission to use his illustration above. After asking his permission I realized he used to illustrate Cracked and MAD magazine…the man is a genius.

Like Loading...
Filed Under: Christianity, Church, Church of Christ
← Progressivism and Conservatism Part 2: Travelers on the Road to Emmaus
Rethinking the Invitation →

2 Responses to Progressivism and Conservatism Part 3: Deal With Reality, Not Caricatures