I was in need of some additional Greek resources so I checked out Logos 6 volume Greek bundle and wanted to give any of you who either know Greek or would like to learn Greek or already have some basic knowledge of New Testament Greek the rundown. This bundle includes:

This bundle runs $149.95 and I really think that is a good value. If you were to try to take on undergraduate course or graduate course in NT Greek you would pay far more than that. It is also a good value compared to the print editions of these books but what makes Logos so helpful are the search tools and integration with other resources. You just don’t get that kind of integration when reading hard copies and it is a big time saver. With this bundle you get one of the best English translations (NRSV), the best Greek New Testament (NA 27), a beginner’s grammar, an intermediate grammar, and an intermediate lexicon. That pretty much covers it.

Beginner’s Grammar of the Greek New Testament: Revised and Expanded By William Davis 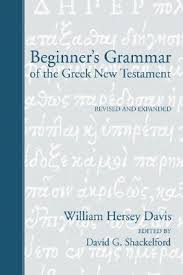 This was truly a beginners grammar for learning Koine Greek. It has an essential component that oddly enough many grammars lack, exercises and good vocabulary lists. I am always amazed when grammars don’t include those kind of tools to actually help you practice learning the language. The exercises are basic and very helpful. I did think it was a little strange that they would have you translate both English to Greek and Greek to English as you will never need to actually produce a single original sentence in Koine Greek in your lifetime but I guess it would help you learn the grammar.

The resources at the end of the book are excellent:

I still like Story & Story’s Introductory Grammar, “Greek to Me” better as I think they do a better job of explaining and illustrating the principles but this book is more comprehensive than “Greek to Me” and could definitely be used by a beginner to learn NT Greek. This book had more Greek examples from the New Testament than Story & Story which is very helpful since translating that is the end goal, it only makes sense that your practice sessions would include that.

This is my favorite Bible translation to study from and I am really excited to finally have this as my default translation in Logos. I am not going to do a thorough review of this as many of you are already familiar with it but I will say that I really appreciate the scholarship and the interpretive framework that produced this translation. As a bonus, now you have the Apocrypha in Logos!

I had been using the free SBL Greek New Testament that you can get for Logos and it really is a good Greek New Testament. What makes NA27 and UBS4 superior is its formatting (including the removal of the English headings that too often get it wrong or get you focused on things that make you miss the point) and the extensive list of OT citations and allusions in the NT. I was disappointed to learn that the critical apparatus was extracted and included in another resource because of licensing restrictions.

Short Grammar of the Greek New Testament By Robertson (1908) 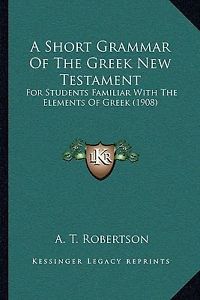 This is more of an intermediate grammar that assumes you have an elementary understanding of Koine Greek. The introduction of this grammar is interesting with some history of Koine Greek and highlights of the work of people like Deismann. Robertson also debunks the idea (way back in 1908) that the GNT is full of Hebraisms. That is something I have been hearing again lately and I was surprised to hear this being said over 100 years ago. The book is a little dated but still a solid grammar. This is the most descriptive NT grammar I have read, which is very helpful but his examples and exercises were lacking (actually pretty non-existent). I would use this book as a reference if there was a concept in NT Greek that I was having a hard time understanding, as his descriptions and explanations are lengthy and quite helpful.

Idioms of the Greek New Testament By Stanley Porter 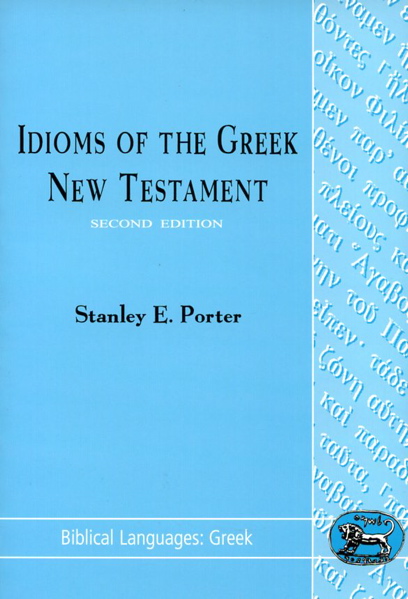 This book also assumes some background in NT Greek (at least one year of study). It is divided into two parts: 1) Individual words and 2) Phrases/Clauses. This book is basically another intermediate level Greek grammar that has lots of examples from scripture. Thorough explanation in a more up to date format than Robertson. I really expected this book to dive into the more creative expressions in the Greek New Testament (what you might expect from a book on idioms) but it doesn’t really fit the bill. Still, overall an excellent intermediate grammar with lots of examples straight from the GNT.

An older but still very accurate Greek – English lexicon for the Greek New Testament. This isn’t as up to date as a lexicon like BDAG but is a great starter lexicon for someone who wants to begin their studies without having to spend as much money to get a lexicon like BDAG (which by itself is basically the price of this entire bundle of 6 books). The Logos version does include the supplements that came out in the 1940s and really does work as a stand alone, all you would ever need lexicon to the Greek New Testament. This lexicon covers the New Testament but spans Homer through the church fathers. What is nice about the Logos version is it has a lot more information linked in via popups throughout the text that help give more information and references along the way.

Overall, I am very happy with this bundle and will reference whenever I am needing to brush up on my Greek, look up a word or need help understanding any particularity of Greek Grammar. This is the “go to” set for any of that. This would also serve as a great set for someone who wanted to pick up leaning Koine Greek on their own all the way to someone with several years of Greek under their belt.

Here is a link for more information.