That last post reminded me of something Richard Beck wrote in his book “Unclean: Meditations on Purity, Hospitality, and Morality” about shame and sexual purity and how we tend to isolate sexual sin into its own, most severe, level of sin. Here is what he wrote,

“Beyond issues of severity, some sins are unique loci of shame as they are almost universally regulated by purity metaphors…they are almost always the sexual sins. As many are aware, sexual sins are often experienced in faith communities as being a class unto themselves, as a particular location of stigma and shame. Why might this be? One answer is that sexuality is distinct among sin categories in being almost uniquely regulated by a purity metaphor. Talk of ‘sexual purity’ is common in most churches. In contrast, few other moral categories are regulated by purity metaphors. We don’t speak of materialism or truth-telling as forms of ‘purity.’ When we spend impulsively or tell a lie we think of these are performance errors-mistakes-rather than a loss of virginal moral purity. No doubt there are good reasons for using purity categories to regulate sexual behaviors. By the time we are adolescents any ‘purity;’ we might have had in regard to honesty has long since been lost. But virginity is very often carried into adolescence and thus, is able to be understood as a state of ‘purity’ that can be ‘lost.’ But this still does not explain why sexual sins are considered to be more shameful…Regardless, it seems clear that both church and society appear to apply to sexuality the most powerful, in regards to stigma, of its regulating metaphors.” – Beck, Unclean, 48-49

What do we communicate when one of the only times we use the word “purity” in Christian circles is “sexual purity?” What do our kids get from that? What does society get from that? Is it because we are more invested in maintaining the sexual purity of our kids than maintaining purity in other, just as significant areas of their lives? Maybe it is because it is a lot easier to talk about anger or covetousness than it is to talk about sex and sexual sin so we isolate, insulate and give the sexual arena its own verbiage. Our approach has inadvertently sent the message that all these other sins aren’t as big of a deal (you can still be pure and do them), just don’t do the really bad, sexual sins (and lose your purity), and you are fine. 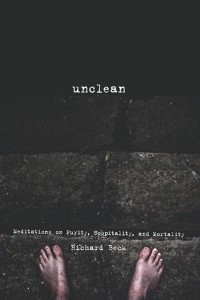 If you aren’t familiar with Richard Beck you should have a look at his blog. He is a professor of psychology at ACU and is a proficient and insightful writer. His blog has consistently made the top 200 Ministry blogs. His blog is called Experimental Theology.

9 Responses to Richard Beck on Shame and Sexual Purity