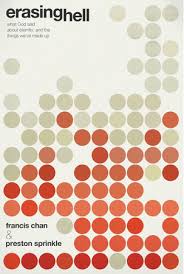 Chapter 1: Does Everyone Go To Heaven? (continued)
One thing Chan and Sprinkle (from here on referred to as C&S) get right that Bell missed was that we are dealing with concepts and not just specific words. In chapter three of love wins Bell writes,

“I want to show you every single verse in the Bible in which we find the actual word ‘hell.'” (p.64)

The problem with that approach is that you can’t just study something in scripture by flipping open a concordance, finding each time a word appears in English, and then doing a word study on that word. Words represent concepts and often concepts are spoken of without the use of some of the specific words we normally think of being related to it. In the hell discussion, Bell talks about specific verses that have “hell” in English but leaves out many verses that are talking about final judgment and hell as a concept because the word “hell” is not used.

What about those passages that say there will be a second chance?
In love wins, Rob Bell talks about this. To be fair he is laying out what some people have said about a second chance but he does seem to lean in favor of it by the end of his description,

“And so they expand the possibilities, trusting that there will be endless opportunities in an endless amount of time for people to say yes to God. As long as it takes…At the heart of this perspective is the belief that given enough time everybody will turn to God and find themselves in the joy and peace of God’s presence. The love of God will melt every hard heart and even the most ‘depraved sinners’ will eventually give up their resistance and turn to God.” (p.107)

“Could God say to someone truly humbled, broken and desperate for reconciliation, ‘Sorry, too late’? Many have refused to accept the scenario in which somebody is pounding on the door, apologizing, repenting, and asking God to be let in, only to hear God say through the keyhole: ‘Door’s locked. Sorry. If you had been here earlier, I could have done something. But now, it’s too late.” (p.108)

Well, scripture does talk about exactly that and tells us exactly what God will do in that scenario. Bell didn’t bring up these verses because “hell” is not mentioned specifically but Chan does because it is important that we discuss concepts and not proof text our words.

“22 Then Jesus went through the towns and villages, teaching as he made his way to Jerusalem. 23Someone asked him, “Lord, are only a few people going to be saved?”

He said to them, 24 “Make every effort to enter through the narrow door, because many, I tell you, will try to enter and will not be able to. 25 Once the owner of the house gets up and closes the door, you will stand outside knocking and pleading, ‘Sir, open the door for us.’

“But he will answer, ‘I don’t know you or where you come from.’

26 “Then you will say, ‘We ate and drank with you, and you taught in our streets.’

27 “But he will reply, ‘I don’t know you or where you come from. Away from me, all you evildoers!’

28 “There will be weeping there, and gnashing of teeth, when you see Abraham, Isaac and Jacob and all the prophets in the kingdom of God, but you yourselves thrown out. 29 People will come from east and west and north and south, and will take their places at the feast in the kingdom of God. 30 Indeed there are those who are last who will be first, and first who will be last.”

Does it get any more clear than that? And that is one of the better arguments for Universalism!

Last, I am a little surprised C&S didn’t bring up 1 Peter 3:19 in this section as some people say it is about Jesus giving the dead a second chance. That is not what that verse is about but it would have been nice for them to mention it and give the background of that verse and why it is about Jesus’ proclaiming victory over the powers of darkness while in the grave. All in all I appreciate that Chan appeals to context in these verses. I just think he needs some better framing questions for the discussion and not put the debate in the same terms as Bell did about God getting what He wants, the power of God vs mercy of God, etc. I just think that still misses the point of what hell is all about.