When you hear people talk about salvation it is often in that some day, over there type discussion. It is true that salvation has components that have not yet taken place (Rom 13:11). But it is also true that in the here and now God is fighting for us. In both testaments the word salvation has the connotation of deliverance…there is a problem, a tension, a struggle that we are in that we need rescued from. We need help from the outside by one more powerful than ourselves. In the Bible salvation and deliverance are thought of in terms of present day physical circumstances (enemies surrounding me and trying to take my life) as well as spiritual circumstances (our need for deliverance from sin and death).

One of the metaphors for God in scripture is God as the divine warrior. He is the one who is fighting on our behalf to bring deliverance, rescue, and salvation from the perils we face in life. When Moses and God’s people crossed the Red Sea and pharaoh and his army were crushed in the sea they sang a song of victory because they had been delivered from the Egyptians and slavery. They sang,

“I will sing to the LORD,
for he is highly exalted.
The horse and its rider
he has hurled into the sea.

4 Pharaoh’s chariots and his army
he has hurled into the sea.
The best of Pharaoh’s officers
are drowned in the Red Sea. [a]

5 The deep waters have covered them;
they sank to the depths like a stone.

7 In the greatness of your majesty
you threw down those who opposed you.
You unleashed your burning anger;
it consumed them like stubble.”
– Exodus 15:1-7

God’s power and might are emphasized here. He is a great warrior coming to battle on their behalf. He has the power and authority to overcome any who oppose him (even sin and death – 1 Cor 15:24-28, 50-58). There are many other places God and his angels are depicted as warriors. Just before the Hebrews went were to fight against Jericho he encounters the “commander of the army of the Lord” (Joshua 5:13-15) who stood before him with a sword drawn in his hand. We see this in the term “Lord of hosts” in the Hebrew Old Testament. God has hosts of powerful angels at his disposal to do his bidding and to lead into battle to fight on our behalf and bring reconciliation to the world through the defeat of evil, sin and death. We see it when David fought Goliath and his reference to God as “the God of the armies of Israel” (1 Sam 17:45). The whole point is, it is God who wins the victories for us in both the physical and spiritual realm. Obviously God doesn’t need a sword, shield or bow to fight against sin and death or any of the struggles we are facing but the point is the same. He is powerful. He is interested in our finding success and victory through Him and His power and ultimately we will gain the victory only because God was on our side fighting for us.

2 if the LORD had not been on our side
when men attacked us,

3 when their anger flared against us,
they would have swallowed us alive;

4 the flood would have engulfed us,
the torrent would have swept over us,

5 the raging waters
would have swept us away.

6 Praise be to the LORD,
who has not let us be torn by their teeth.

8 Our help is in the name of the LORD,
the Maker of heaven and earth.

We find this in the New Testament as well. In the ministry of Jesus we find him bringing salvation and deliverance to a number of circumstances. What is interesting is that several translations leave out this connection because Christianity has so traditionally been so focused on salvation being about getting to heaven that we have missed the point that salvation is just as much about God working in the here and now to make things right. Translations like the NIV often use words like “heal” where the underlying meaning has a lot to do with being rescued. For instance, in Luke 8:48 he tells the woman who had been bleeding for years that her faith has “healed her.” That same verb can be translated “save” or “to bring salvation to.” In other words, Jesus is saying there is more happening here than just her body feeling better. He is saying that he is bringing restoration to her and making her more in line with how God intended for her to be.

It is important for us as Christians to realize that God is ready and able to work in our lives in a significant way. When God answers our prayers for healing we should realize there is more going on there than just I was feeling bad and now I feel good. God is working on our behalf, fighting for us in ways that we cannot comprehend. Even more so when it comes to sin and forgiveness. Somehow we are more amazed at an illness healed than a sin forgiven. We get more awestruck by cancer that has vanished than we do a lost person who is found. Both are significant and both should continue to amaze us because in both instances we realize that it only happens because God is fighting for us in a way just as significant as the way he fought against the Egyptians or Jericho or Goliath. The point is the same. Victory only comes through his name (Acts 4:12). 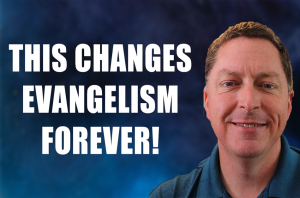