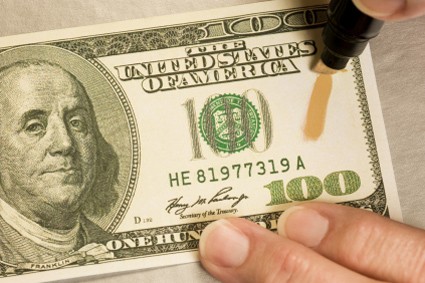 I was at the gas station the other day and I noticed something I had never seen at a gas station before. It was a bunch of $20’s all tacked up to the wall and each had the word “Fake” written on them. I asked the cashier about them and she said they put them on display as a deterrent. Ever the curious one, I asked her how they could tell it was a fake…if they use that little marker or what. She said that after seeing enough of them, she doesn’t need that little marker any more. She said you can’t even tell by the way it looks as some even have the watermark duplicated. The way you can tell is by the way it feels in your hand. The paper the government uses to print money has a very different texture to it than most fakes.

It got me to thinking about authentic faith. Before I go any further, I want to say that we aren’t the judge to tell whose faith is authentic and whose is fake. But it did remind me that there are times when something looks right…its outward appearance seems to be correct but there is something else going on. You can’t quite tell it from the outward appearance but you can just feel it. Your antenna goes up and you know something is out of place. Something is not the way it is supposed to be.

It is important that we are able to discern what is good and true and legitimate and what is a phoney. Again, this is not about being the eternal Judge of the universe. It is about being wise and savvy. It is about being so in tune with God that when something comes along that is out of tune, you notice.

Like Loading...
Filed Under: Christianity, Ministry
← Why Does Psalm 139 All of a Sudden Shift From a Sweet, Best of all Time Psalms to a Vicious Tirade About Enemies?
Final Words From a Dear Sister →

One Response to Counterfeit