Detroit Church Fasts and Prays for a Bailout for Automakers 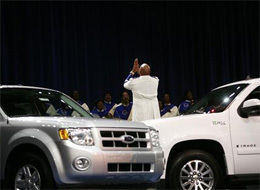 The Greater Grace Temple in Detroit had a Sunday service devoted to God moving Congress to grant a bailout to the auto industry. With 3 SUV’s on the stage Charles Ellis organized a service to encourage members, many of whom have pensions from the auto industry and to pray that God would work things out. Reuters quotes him as saying, “We have never seen as midnight an hour as we face this week.” referring to the impending decision that will probably be delivered this week by the House and Senate.

When I first heard this I have to admit I was floored. It is disturbing to see those SUV’s on the stage with people worshiping all around them. It just gives me flashbacks to the foot of Sinai and the all too easy temptation of seeking the kind of God we want at the foot of the mountain, a powerless, lifeless God of golden paycheck materialism. All the while the real God is on top of the mountain in all his glory looking down on this display of egregious mistrust of the sovereignty of God. God doesn’t need Congress to fulfill Matthew 6:19-34. God doesn’t need the Senate to fulfill Psalm 33:4. If the bailout fails, God hasn’t failed. If this is the worst “midnight hour” this preacher has ever faced then he must not deal with people living in sin very often. I am also tempted to question the priorities of believing God must work through the government for Christians to survive.

Here is a quote from Reuters –

“At one point, Ellis summoned up hundreds of auto workers and retirees in the congregation to come forward toward the vehicles on the altar to be anointed with oil.

“It’s all about hope. You can’t dictate how people will think, how they will respond, how they will vote,” Ellis said after the service. “But you can look to God. We believe he can change the minds and hearts of men and women in power, and that’s what we tried to do today.”

Then there is the other side of this minister facing those in his congregation who have depended on their pensions for their income and are greatly troubled at what the ramifications of this week might bring to their lives. Should we pray for pensions? Should we pray for unions? Should we pray for bailouts? Or maybe we pray God’s will be done and that we will humbly submit whatever answer he has for our lives. I still believe in Matthew 6 even if the bailout fails. That is easy for me to say since my pay doesn’t come from one of the “Big 3.”

Last, is this just another example of praying for the hands of the doctors to heal someone (which is heard in the prayers at many congregations on a weekly basis)? Would it be the same if brought in a bunch of doctors and nurses to stand on the stage as we prayed for the sick of the congregation?